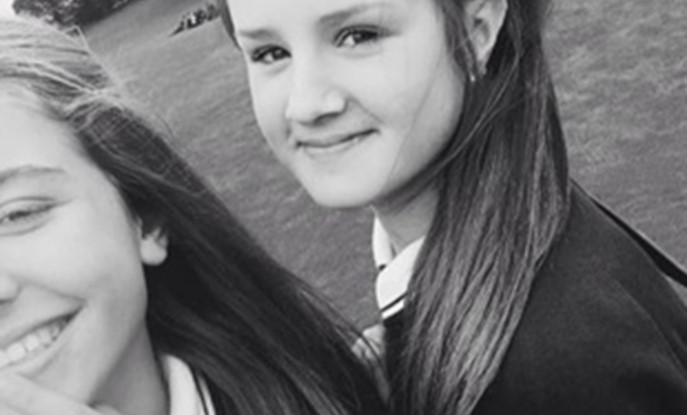 A Newcastle College student is taking part in the world's biggest half marathon to raise money for research into the disease that claimed the life of her young friend.

Maia Gray, currently studying Biology at the College, will take part in next month's Great North Run following the death of her best friend Rhya Story. Maia and Rhya were pupils at Haydon Bridge High School when Rhya died suddenly from an aggressive, inoperable brain tumour. She was just 14 years old.

Maia, now 18, said: "Rhya and I were best friends. We clicked as soon as we met. We were both sporty and competitive and became best friends at the beginning of year nine.

"At the end of the school year we said goodbye and didn't get around to meeting up over the summer holidays. She never came back to school after that, as she'd been suffering from really bad headaches and was taken ill.

"She died in October, four weeks after being diagnosed with this terrible disease. It was just so tragic."

Rhya, who was from a small farming village in Northumberland, was a keen footballer and played for Haltwhistle United under-15s. Her tragic brain tumour journey captured the support of the footballing world, with everyone from Alan Shearer to players from AC Milan, Newcastle United and Rangers backing the #HEART4RHYA hashtag, with messages of comfort and encouragement.

Maia, a self-confessed non-runner, was inspired to raise money for Brain Tumour Research, having discovered that brain tumours kill more children and adults under the age of 40 than any other cancer, yet just 1% of the national spend on cancer research is allocated to this devasting disease.

She said: "It's unacceptable to think that Rhya's death and the deaths of so many other young people could have been prevented, had more funding gone into finding a cure. My aunt has also been treated for a brain tumour but is thankfully now in remission. Too many people are affected by this cruel condition; it's a cause close to my heart."

Rhya's death shook her whole community but it is motivating Maia to raise as much money as possible for Brain Tumour Research, as she continued: "I've set my target at £500 but I'm hoping to smash that! Anyone who knows me knows I never run and so the training has been tough. My grandma, aunt and mum have all completed the race previously, so that's extra motivation and they'll be there to cheer me on. Finishing the race will be a huge achievement."

Maia will be among thousands of runners taking part in the annual Great North Run on 8 September, with runners setting off on the 13.1-mile course from Newcastle city centre before finishing at the coast in South Shields.

To donate via Maia's page, please go to www.justgiving.com/fundraising/maia-gray