Newcastle College roofing apprentice Josh Bickerstaff has been named Apprentice of the Year by his tutors and employer partner Cupa Pizarras. 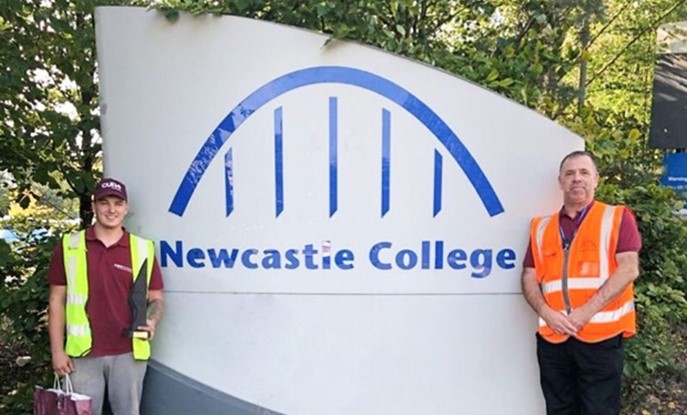 Newcastle College roofing apprentice Josh Bickerstaff has been named Apprentice of the Year by his tutors and employer partner Cupa Pizarras.

After months away from on-campus practical learning, Josh returned to College in September to receive the trophy from Programme Leader Alan Bessford and Roofing Instructor Jay Lewis in a socially distanced ceremony.

“He was shortlisted at Newcastle College’s Apprenticeship Awards earlier this year but just missed out on the prize, so I’m really pleased we were able to award him Apprentice of the Year.”

Jay added: “Josh works really hard in his apprenticeship and more than anything, he really takes pride in his work. He definitely deserves the title of Apprentice of the Year.”

The annual ‘Roofing Apprentice of the Year’ competition is sponsored by Cupa Pizarras, the world leader in natural slate and a longstanding partner of the College.

As part of the prize, winners are usually offered a trip to the famous Cupa Pizarras quarries in Northern Spain - the biggest tectonic natural slate reserves in the world – to see first-hand how slate is excavated and manufactured.

Due to the ongoing global travel and safety restrictions, Josh’s trip has been postponed but he hopes to head to Spain as soon as possible.

Josh commented: “I’m really pleased to receive this award, I definitely wasn’t expecting it! I’ve got thank Alan and Jay for all of their help with my training.
“I’m disappointed we won’t get to travel to Spain just yet, but just being named Apprentice of the Year is amazing and hopefully we’ll be able to head out there soon.”