A Newcastle College University Centre student has jetted off to Dubai as part of an elite group of female cricketers representing Durham Girls Academy. 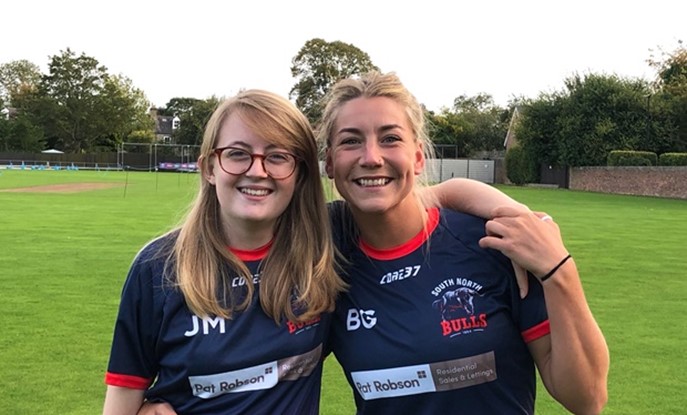 A Newcastle College University Centre student has jetted off to Dubai as part of an elite group of female cricketers representing Durham Girls Academy.

Jenny McDowell, who is studying for a degree in Graphic Design, has joined a squad of 14 girls on a 12 day trip to compete in the 2020 Gulf Cup, the first time a female group from the region has competed in the tournament.

Newly – crowned BBC Sports Personality of the Year Ben Stokes was an unknown quantity when he first represented Durham at the annual Gulf Cup in Dubai. However, since a teenage Stokes made his tournament debut, the world-renowned showcase for junior cricket has become a breeding ground for the game’s rising stars.

“I have met Ben at Durham and he is an inspiration to all of us coming through. It is amazing to think I will be following in his footsteps and representing the North East overseas.

“I cannot wait to get started. It is my first experience of playing cricket abroad and it should be a fantastic trip.”

Now midway through the first year of her Graphic Design degree, Jenny has been given flexibility to focus on sport at pivotal times during the cricket season from staff and tutors at Newcastle College.

She has been able to combine her passions for graphic design and cricket thanks to the decision to create and brand a new North East women’s team.

She said: “I was asked to help design the logo for the new cricket team. I jumped at the chance to get involved. I’ve had two meetings so far and have thought about designs but it is early days. The team name has yet to be finalised. It is looking like there will be a complete re-brand with new colours as well as the new team.

Speaking about her future she added: “Outside of cricket that is what I love doing. I know cricket is not going to be my main job for the rest of my life. I have always wanted to continue my education and keep my options open off the field but my tutors understand there are times when cricket has to be my priority.

“I have established myself in the North East Academy side and my ambition is to make the England squad and play in The Hundred at some stage. Dubai will be a fantastic learning curve and a great opportunity to test myself against cricketers from all over the world.

“After that, who knows? I will just keep working hard on and off the field.”