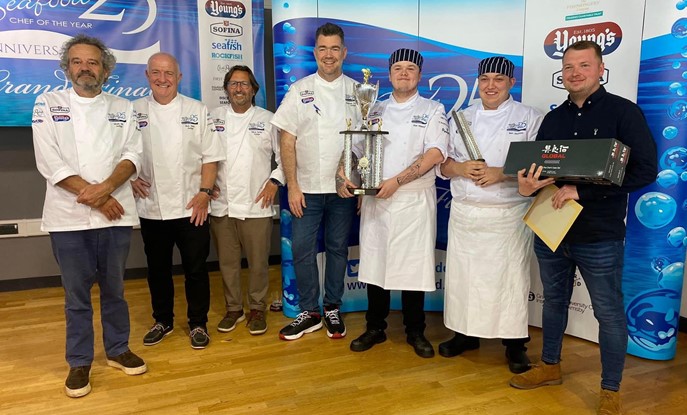 The competitors created a range of seafood dishes from scratch to be judged by world-renowned seafood chefs Rick Stein, Mitch Tonks, Mark Hix and Nathan Outlaw, for the chance of bagging the priceless grand prize.

Kian and Ben, who are currently studying for degrees in Culinary Arts, competed against eight teams of the best young chefs in the country, at the national final of the competition in Grimsby on 10 June.

Kian said: “Taking part in the competition has been incredible, and it’s still sinking in that we’ve won. It’s been great to have been able put everything we’ve learned in the classroom and workplace into action. We’ve also had the chance to meet and learn from other chefs from across the country. A special mention goes to our lecturer who has been a great mentor and inspiration throughout our time here at the college.”

Ben added: “The experience I’ve gained from the competition really helped develop me as a chef. Thank you to our lecturer, it feels amazing that all the work has paid off."

Newcastle College Chef Lecturer Matthew Beadnell said: “It’s a really tough competition.  Both Kian and Ben worked so hard practicing their skills for hours at a time. I felt like a proud parent watching them compete and they thoroughly deserved to win. They’re a credit to me as a lecturer.

“Kian wants to go and work in Australia eventually, and through this competition he was able to have conversations with Rick Stein who has offered him a placement, when the time comes.”

As winners, Kian and Ben will undertake a two-week placement at one of Mark Hix’s seafood restaurants in Dorset as well as taking home a set of Global knives (worth £1,000), a year’s subscription to the Craft Guild of Chefs, and individual trophies.

The Seafood Chef of the Year competition is renowned across the seafood industry for the experience it gives to participants; providing the young chefs who compete with a platform to display their knowledge, skills and talent for preparing and cooking seafood from sustainable sources.