Craig Bell of Bell Group name-checked Sir Bobby Robson, Elvis and Richard Grainger as inspiring apprentices at an event celebrating the region’s workforce of the future. 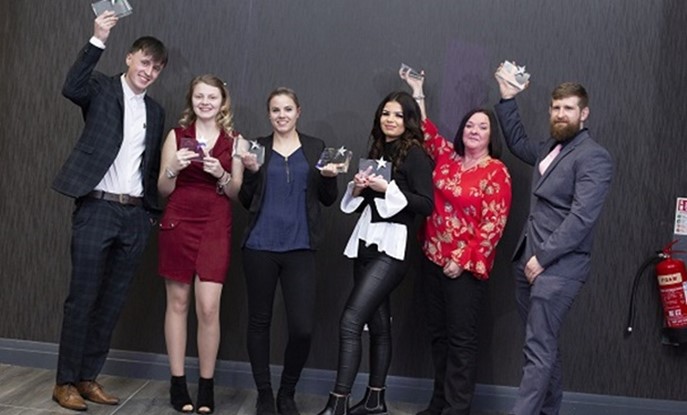 Craig Bell of Bell Group name-checked Sir Bobby Robson, Elvis and Richard Grainger as inspiring apprentices at an event celebrating the region’s workforce of the future.

Mr Bell referenced all three game changers at the annual Newcastle College Apprenticeship Awards to a packed audience at St James’s Park, who were left in no doubt that learning a trade and laying down foundations for the future has never been more important.

“I’m a great believer that anyone can be great and those who achieve great things are those who work hard and enjoy themselves,” said Bell.

“Everybody needs a chance, a break, a step up the ladder. And at Bell Group we believe the best first step on that ladder is with an apprenticeship.”

Newcastle College students were shortlisted for seven awards recognising a range of qualities at the event, which was part of the College's National Apprenticeship Week celebrations.

Fanni Szvetkov, a Customer Service Apprentice with JT Dove, walked away with the evening’s biggest prize after she was crowned Outstanding Apprentice of the Year.

“I really enjoy my apprenticeship,” she said. “I would recommend it to anyone as a great way to learn and put your skills into practice.

“I feel lucky that I’m in such a great position and I get all of the support that I need from my Skills Trainer and all of my colleagues at JT Dove.

“When it was announced that I was the winner in two categories at the Apprenticeship Awards I was over the moon. I felt so appreciated and it just motivates me to work even harder!”

Szvetkov also scooped the Special Recognition award, nominated by her Skills Trainer Amanda Davis-Stephens, who said: “When Fanni started her apprenticeship she was quite shy and did not know much about the industry, but she understood this was an excellent opportunity to gain employment within a successful, longstanding company.

“Since starting her role Fanni has learnt a huge amount about the industry and our products and attended training courses both internally and externally. She has worked in different departments throughout the branch to gain an understanding about how each one works.

“Fanni is a talented female, successfully working in a male dominated industry. As English is not her first language this has meant Fanni has had to overcome some issues and improve her communication, which she has done to a high standard.”

Jordan Condren won the Apprentice Champion Award and he said: “I’ve just completed my apprenticeship - the past year has been an amazing experience.

“I’ve worked really hard with the support of Newcastle College and Hodgson Sayers and it has really paid off.

“I’ve not only won a gold medal at WorldSkills but I’ve now been awarded Apprentice Champion of the Year too. It’s great to be finishing on such a high.”

The annual Newcastle College Apprenticeship Awards recognise and celebrate the success of apprentices who have made a significant contribution to their workplaces and those who go above and beyond to champion apprenticeships.

The awards ceremony provides a platform for apprentices and employers to share their stories and successes on how apprenticeships have made a real difference and significant contribution to their organisation.

Throughout National Apprenticeship Week, Newcastle College provided presentations and Q&A sessions for parents and young people. Staff offered guidance on the opportunities available and helped prospective apprentices take the first step towards securing a placement. Employers including Bell Group, Malhotra Group, JT Dove and Gleeson Homes were all on site to add industry expertise and advice.

The full list of the 2020 Newcastle College Apprenticeship Awards winners is as follows: